Bio toilets in India: An unexplored avenue for manufacturers/marketers 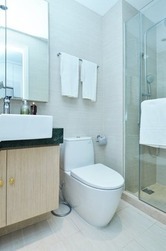 The Bio-digester, which is christened as bio-toilet, is a dry toilet that uses a predominantly aerobic processing system that treats excreta, typically with no water or small volumes of flush water, via composting or managed aerobic decomposition. Composting toilets may be used as an alternative to flush toilets in situations where there is no suitable water supply or waste treatment facility available or to capture nutrients in human excreta as humanure. They are in use in many of the roadside facilities in Sweden and in national parks in both the US and the UK. The human excrement is normally mixed with sawdust, coconut coir or peat moss to support aerobic processing, absorb liquids, and to reduce the odor. The decomposition process is generally faster than the anaerobic decomposition used in wet sewage treatment systems such as septic tanks. Composting toilets use the natural processes of decomposition and evaporation to recycle human waste. Waste entering the toilets is over 90% water, which is evaporated and carried back to the atmosphere through the vent system.
The small amount of remaining solid material is converted to useful fertilizing soil by natural decomposition. This natural process, essentially the same as in your garden composter, is enhanced in commercial composting toilets by manipulating the environment in the composting chamber. This technology has been developed by Gwalior based Defence Research and Development Establishment (DRDE) and Tezpur based Defence Research Laboratory (DRL). The technology was used to decompose biological waste generated by soldiers deployed in high-altitude regions such as Siachen and Ladakh. These can effectively function in extreme conditions and temperature ranging from - 6 degree C to 50 degree C. The innovation degrades and converts the human waste into usable water and gasses in an eco-friendly manner. The generated gas can be utilized for energy/cooking and water for irrigation purposes.

The process involves the bacteria, which feed upon the fecal matter inside the tank, through anaerobic process which finally degrades the matter and releases methane gas that can be used for cooking, along with the treated water. DRDE has developed an innovative technology for disposal of human waste in eco-friendly manner at locations where temperature drops to –40 deg C or lower. It is not only useful for glacier but to other snow bound areas of any altitude prevailing in India. During waste treatment colour less, odour less, inflammable biogas (methane) is generated as a byproduct which can be used for various energy intensive activities like lighting, water and room heating.
The design and technology being used in the bio-toilets are entirely indigenous. The bacteria being put into six chambers will eat up everything. The Defence Research & Development Organisation, Gwalior, is helping us a lot in this matter. However, a major challenge facing the Railways is teaching passengers how to use the new toilets properly. At present, the passengers are used to treating a train toilet as a dustbin throwing napkins, bottles and various other things. Such exercises will be prohibited in the bio-toilets. Use of highly acidic and alkaline cleaning agents will also be a no-no.
The technology has two major components, such as low temperature active inoculum. Temperature controlled bio-digester. A consortium of anaerobic bacteria has been formulated and adopted to work at very low temperature. This is the component which acts as inoculum to the biodigester and converts the organic waste into methane and carbon dioxide. The anaerobic process inactivates the pathogens responsible for water born diseases.
The benefits, it is felt, will be many. Corrosion of railway tracks will be reduced; the stations will remain clean; it wills save water and the on-board facility will be odourless. Capping it all, the whole scheme will fit into the government’s national scavenging policy discouraging use of human beings to clear the muck, in addition to those, the following are the benefits and advantages of bio-toilet:

Bio-toilets have been fitted into coaches than the entire number fitted in the last three years. The number of bio-toilets fitted into passenger coaches from April to July in 2013-14 was 2,285, against 1,337 bio-toilets fitted during 2012-13, 169 during 2011-12, and 57 during 2010-11. The first bio-toilet-fitted train, Gwalior-Varanasi Bundelkhand Express, has been running since January 2011. In 2019, and train travel is expected to become so much more eco-friendly. By that time, the Railway Board hopes to complete installation of bio-toilets in all 40,000-plus coaches of the Indian Railways. There are already installed about 500 such toilets, mostly in existing coaches, after running a pilot project for two years in two trains and we hope to install 3,000 more in the current fiscal, Arunendra Kumar, Member (Mechanical), Railway Board, told Business Line. All the new coaches coming out of IR coach factories at Kapurthala and Perambur will be fitted with bio-toilets. But then, the job is not so easy. First, the cost, is prohibitive. Installing bio-toilets in each coach costs around Rs. 3.5 lakh, and each will have four such toilets. Next, for new LHB coaches, the toilets have to be redesigned. Finally, fitting the new toilets in an existing coach is proving difficult because the coach has to be taken out of operation, thus creating the shortage of seats available for travel.
The major players and manufacturers in this market include Alfa Next Gen Tech India pvt ltd, SRG International Private ltd, Paryavaran Solutions, IOTA Engineering Corp, Neo Systek, Alfa-Therm ltd, Arkin Creations pvt ltd, Mohan Rail Corp, West Coast Enterprises pvt ltd, Indian Centrifuge Engineering Solutions pvt ltd, Dynamechs Technological Solutions, CBS Technologies pvt ltd, KC Green Revolution pvt ltd, Bins N Bins Traders, and Aspire Solutions.